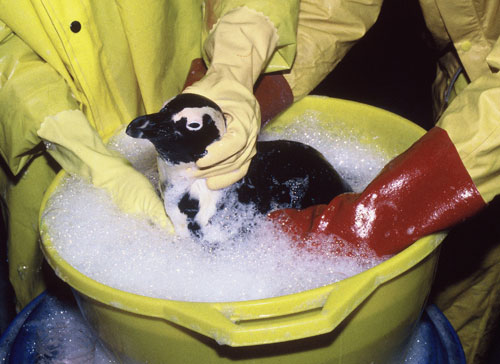 Dyan deNapoli is “The Penguin Lady.” She fell in love with dolphins first, from watching “Flipper” as a child. At thirty-two she went back to school to pursue her dream. She then took a job in the New England Aquarium’s penguin department and was hooked.

An urgent cry went out to anyone and everyone who could help – and Dyan answered that call, serving as a rehabilitation manager during the first few weeks of the rescue. It took 12,500 volunteers and three solid months of around-the-clock effort to heal the injured birds. Ninety-five percent made it through!

Dyan had no doubt, when the last penguin was released, that a book had to be written about this momentous effort. It took two and a half years to finish the book, from beginning the planning to holding a copy in hand. She started by attended writing conferences. She found an agent who believed in her, and days after approaching several publishers, Simon & Schuster offered Dyan a contract. They were attentive to her expectations of quality and of publishing the book in a ‘green’ manner. Then the day came when The Great Penguin Rescue was ready to release!

Her book has won several awards including the 2011 Nautilus silver award and the 2011 Massachusetts “Must Read” book accolade. She’s been on TV, radio, in numerous newspapers and magazines, and even presented a TED talk.

Dyan continues to lecture and write to bring awareness to endangered penguin species, donating 20% of her proceeds to penguin conservation groups. Her book is available in hardcover, paperback, ebook, and audiobook. Stop by her webpage to say hello and support the cause!

Image of penguin supplied by Dyan DeNapoli and used with permission.